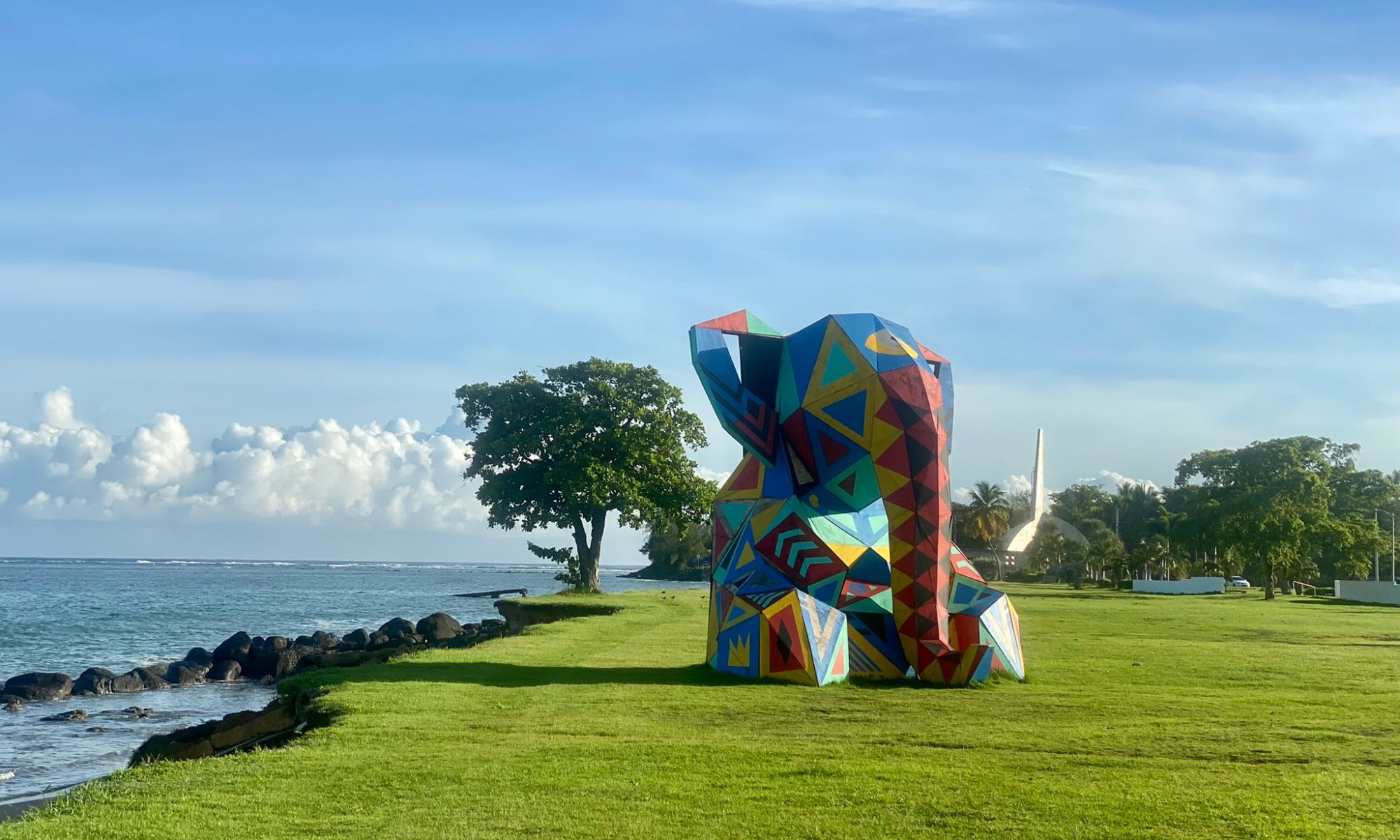 Hi Again! I’m a bit behind, but I had a quick trip to Puerto Rico earlier this month to meet my friend Vera. We met last year in Costa Rica at yoga teacher training, and had a blast walking the beaches and hiking together, so we thought some new beaches were in order!

We booked an AirBnB on Carolina beach in San Juan. It was a great little spot with a fantastic view where we could enjoy walking, swimming, and watching the sunrise and sunset.

After getting our bearings, we decided to go out and explore, so Vera found us an adventure tour to El Yunque Rainforest where we could hike, swim, see a waterfall, and SHE could jump off the rocks and try a natural waterslide. Being the tail end of hurricane season we were expecting some rain, so were not surprised when our hike started in the rain (and it’s a rainforest…:-)). As we approached the spot to swim and hike on to the jumps and water slide, the weather cleared and everyone was smiling.

We spent a short time playing in the pool at the falls until Vera, another guy, and I left with our guide Andres to hike to the upper pool, slide, and jumps. Yes, they convinced me to try the slide, as I’m not a jumper. As we hiked on, a storm made its way in and the skies let loose. We arrived at the top pool in the pouring rain, and the water was rushing. Andres decided to test the slide first and shot out right to the rock in front of it. I was leery, but he said he would go down and hangout in front of the rock to catch us. When he got back down, the current was strong and he couldn’t stay in one place, so he decided it wasn’t a good idea after all. Dang!

The next plan was to jump, which Vera was excited about, and I was excited to watch her scream as she flew off the rocks (this was a Costa Rica thing too). I decided to hike back down, as I do love hiking! By the time we both got down to the pool, the guides decided it was time to get out. Flash floods are common and we still had a hike back up the mountain with a couple in the other group who weren’t strong hikers. A few people were lagging behind as the water got rougher. We finally decided some of us had to make a break for it and begin climbing up the hill along the water rushing down. Luckily we all made it back up safely, and headed to town to get some lunch.

For our next adventure, we tried the local bus to see what El Viejo San Juan (Old S.J.) had to offer. It is known for its colorful old world architecture and five-century-old forts. By the time we finally arrived, as the bus wasn’t exactly on the “live” schedule shown on the website, we were starving and ready to find some food. We headed into town and came across a 70-year old restaurant, Café Mandolin, which is now owned by the third set of owners since its inception. It was fun to sit at the counter and imagine the centuries of fun that had been had on the same stools! On the way, we enjoyed the architecture and the cool glazed brick streets!

After lunch and seeing the town, we made our way to Castillo San Felipe del Morro on the northwestern tip of the island. As we arrived and were walking up the trail to the castle, tiny bugs filled the air so thick it felt like wading through honey. So crazy! This was the first time I was actually excited to have a mask to put on so I could keep my afternoon calorie count to a minimum! Luckily once we were inside, past the grassy area, it was much better. As we were nearing closing time, the skies let loose again and kept the bugs at bay while we walked back through the shower!

And last, but not least, we had some beach and swim time in the Atlantic!

Thanks for reading. Until next time, Cheers, Hugs and Love,

One Reply to “San What? San Juan, Puerto Rico!”