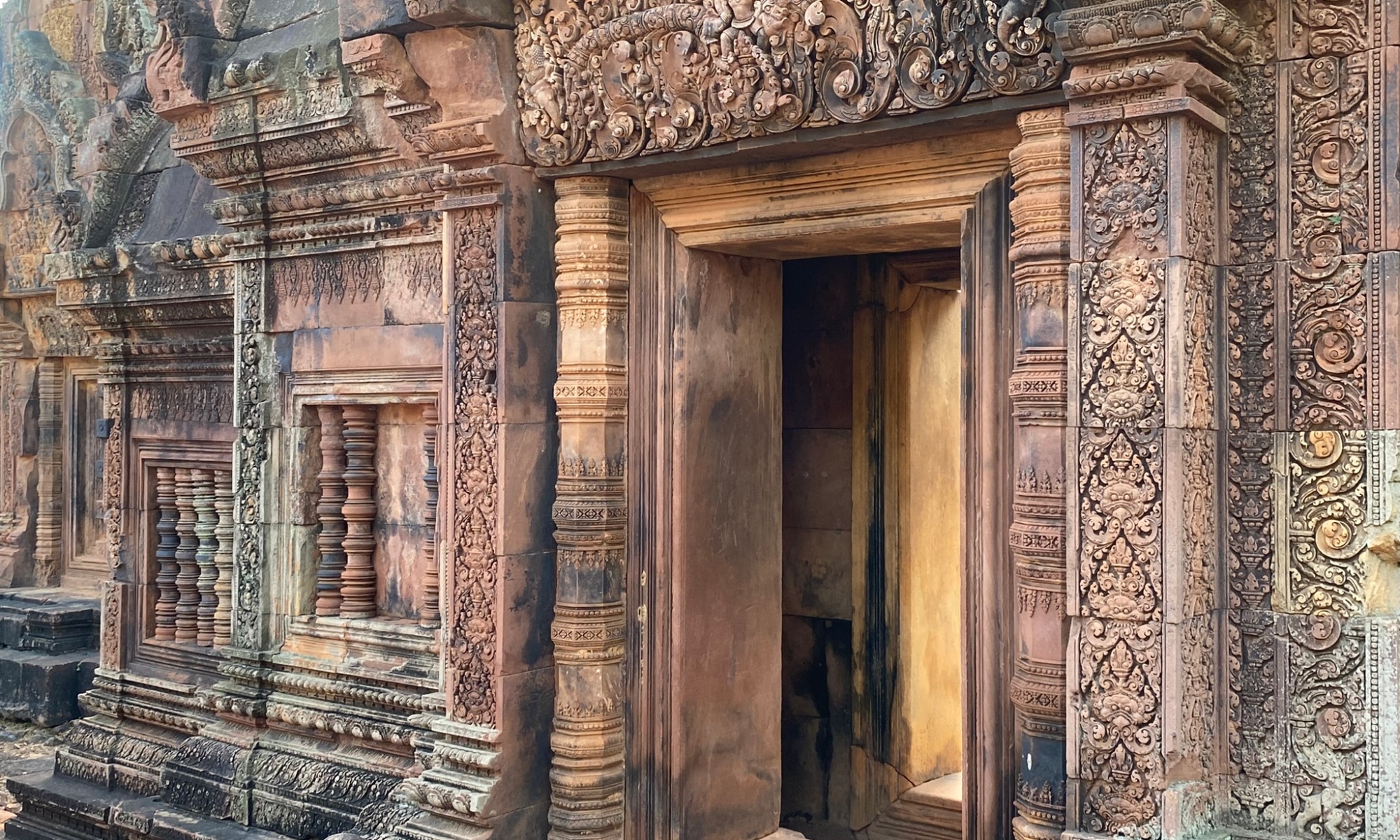 Hello my friends! I’m so far behind with posting all the beautiful things I have seen and places I have visited in Cambodia! I’m overwhelmed with photos and don’t even know where to start! I’m so grateful to Carmen for recommending Chalky! He has been the most wonderful guide and friend and has taken me off the beaten path to see all the natural wonders around Siem Reap. Here’s a little recap. I hope you enjoy the tour….part 1!

On the way out of town, we took the scenic roads through the country, passing by many rice paddies and a little village known for its crazy amount of tall, skinny palm trees that dwarf all the humble, rustic homes.

About an hour after leaving, we arrived at the beautiful jungle temple, Beng Mealea, about 70 km outside of the city. The photos don’t do it justice, as it so magnificent! It is a natural beauty that has yet to be rehabilitated, presumed to have been built over 900 years ago. It is thought to be related to the famous temples of Angkor, but little is really known about its origins. Some Hindu and Buddhist carvings have been found, but there have been no inscriptions giving any clues about who may have built it. Now, the trees are having their way, wrapping their vines around to hold the temples together the best they can.

Next, we made our way back towards the temples of Angkor, where we stopped about 30km northeast of Angkor Wat at Banteay Srei, also called the Pink Temple and Lady Temple. This 10th century temple was dedicated to the Hindu god Shiva. It is made of a pinkish sandstone

Banteay Srei is one of the most elaborate temples at Angkor, Cambodia. Dedicated to Hindu god Shiva, this 10th-century Cambodian temple is famous for its beautiful pinkish sandstone and intricate three-dimensional wall carvings. It is one of the smallest temples in the area, but definitely one of the most detailed and attractive. Banteay Srei means “Citadel of the Women”. It is believed that the intricate carvings could only have been done by a woman. What a treat to see such beauty!

Just outside of the Lady Temple, I learned an important lesson from the large trees (like the one I have a selfie with)….these trees have their own protectors! I wandered over to one to get this shot when Chalky was looking at something else. Almost immediately, I was jumping around swatting at my ankles. Chalky started cracking up, barely able to contain himself as he said, “Oh, red ants?? They protect the trees. They thought you were trying to hurt it!” Wow, these suckers bite hard! Luckily, he was prepared, and ran over with some menthol bite cure, and the pain was gone in no time!

After this full day, we headed back as the sun went down by the jungle potato farmers and some beautiful lakes!

Oh, and I almost forgot…I noticed this amazing portrait painted on a house on the side of the road. I yelled to Chalky that I would love to go back and get a photo. He knew exactly what I was talking about and we turned around. He said this house is known to be haunted and that they have tried to film parts of movies here, but have not been successful because the cameras always fall over..????!!!

Until next time, peace, hugs, and love!