After two nights in Vientiane, Laos, I made my way to Siem Reap, Cambodia.
Here, I found a nice, quiet hotel a few minutes from town. It has been nice to slow down a bit!

I met a nice couple at the pool and we decided to do a marathon temple day combining two tours in one, including sunrise and sunset! They looked at us a little funny when we said we wanted to do this, but we assured them we were tough. Our tuk tuk driver picked us up at 5 am and we began our journey. We saw the sunrise over Angkor Wat…it was breathtaking!

As the morning went on we approached every temple ambitiously as we climbed the steep, narrow stairs to the top. The detail is amazing and the giant trees growing through the stones are sweet! 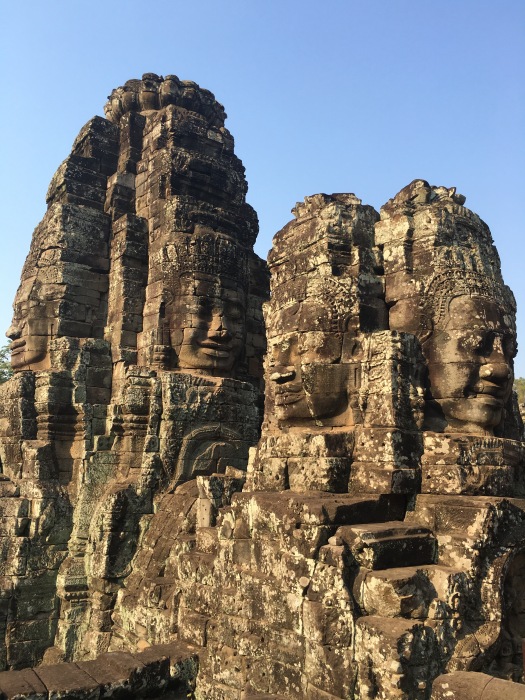 Of course, what’s a day without a little drama. In between temples, our driver stopped on the side of the road so we could check out the monkeys. As we were all laughing and taking pictures, there was a quick skid and…crash. We were rear ended by another tuk tuk who was a little too into watching the monkeys himself. No worries, just a little ding in the bumper, more laughs and we were back on our way.

By noon I think we had each downed about 6-8 bottles of water and sweated out twice as much (it is 105 degrees and crazy humid!!). At this point we were one temple away from finishing the first loop. We decided it was time to refuel if we were going to make it, so we stopped for lunch. It was delicious, but filling….we forged back into the heat. The fruit plate may have been a better option than rice!

The next three or four temples were a bit of a struggle, but we refused to quit as our tuk tuk driver laughed at us and cheered on our sweaty, red bodies. After the food wore off a bit, we were back at it, cruising through the small temple loop. At the end of the afternoon, we hiked the final stairs to the top of the last temple to see the sun setting and Angkor Wat in the distance…….another AMAZING day!

One Reply to “Angkor What??”