First of all, I’m sorry for the delay in the blog. Although we saw some amazing sights in India, it was intense and extremely exhausting. We are now in Nepal catching our breath, so I will give you a quick update. I am also planning on writing a “Reflections of India” post when we return home to discuss the happenings and emotions in more detail.

So, with that, I will pick up where I left off after visiting the Taj and spending a day back in Delhi.

We boarded the plane in Delhi headed for Varanasi after just learning there are 3.5ish million people in this “smaller” city. Hoping for a bit of peace and quiet, this idea started to fade. We landed on the morning of New Year’s eve and made are way to the Wander Station hostel.

The journey to the hostel was interesting. After being dropped on the edge of the city, we took a bicycle rickshaw to the edge of the old town where we had to walk in the rest of the way. The old town is filled with a series of narrow paths lined with restaurants, shops and services. The paths are filled with people, trash, goats, cows, motorcycles, monkeys, dogs, mice and other little creatures. With all of the animals, you can imagine what we were walking through….💩!!! 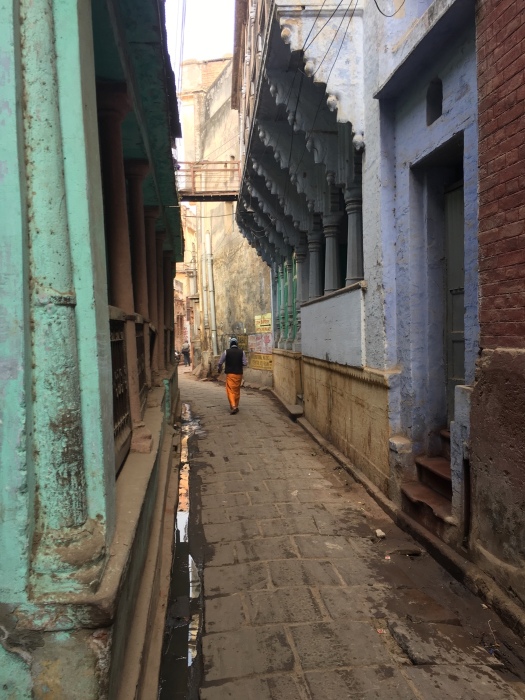 When we found the hostel it had a good vibe. There were lots of young travelers gearing up for the NY party, playing music and laughing. We got a bit of rest and took a walk down to the famous Ganga River. The river bank was crowded with people and animals surrounded by decorations and offerings near the Hindu temples. At the temples there were bell rooms where people were ringing these large bells with all of their strength, over and over…..the sounds filled the air down the river bank! 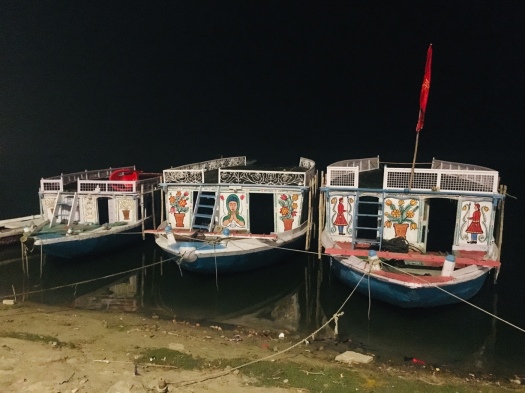 At the end of the river walk we found what we had heard of, but didn’t expect to see….the evenings funeral pyres. It was A LOT to take in. We are so used to death and cremation activities being sterile and hidden instead of being done in public. We took a seat on the steps and were able to observe some very personal moments with several families. They stacked the wood with care, then carried the decorated bodies in on bamboo stretchers. Next, they removed the decorations, wrapped the body in white cloth and washed them in the river. Once clean, they were placed on the pyre and covered with more logs before lighting the flame. The ceremony takes about three hours, then the remains of the pelvic/hip bones are taken out to the middle of the river and dropped out of the boat. It was very emotional and left us lost for words.

After watching the ceremonies, we decided to have a quiet evening and forgo the wild New Year’s rooftop party. We did venture out and found a Korean run hostel with an amazing restaurant where we had a delicious dinner on the cozy floor cushions. This became one of our favorite spots to relax in the heart of the action.

The next day we got up early and found a ride to Sarnath, the spot where Buddha gave his first teaching, the Four Noble Truths. It was beautiful and amazing to see, but as with everywhere in India we were constantly pestered for selfies, stared down, and begged for money….all very exhausting!! 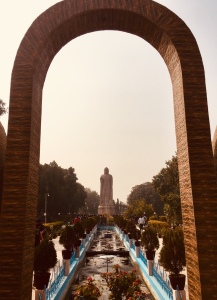 So, with that, we decided our time had come to an end in Varanasi and we bought a train ticket out late in the evening headed for Gaya. Troy has offered to “guest write” the next blog, so I will leave you with hugs and love. 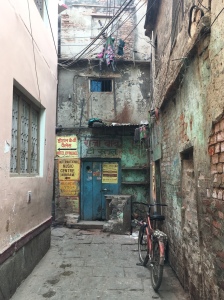 One Reply to “Varanasi, India….An unforgettable experience along the Ganga River”