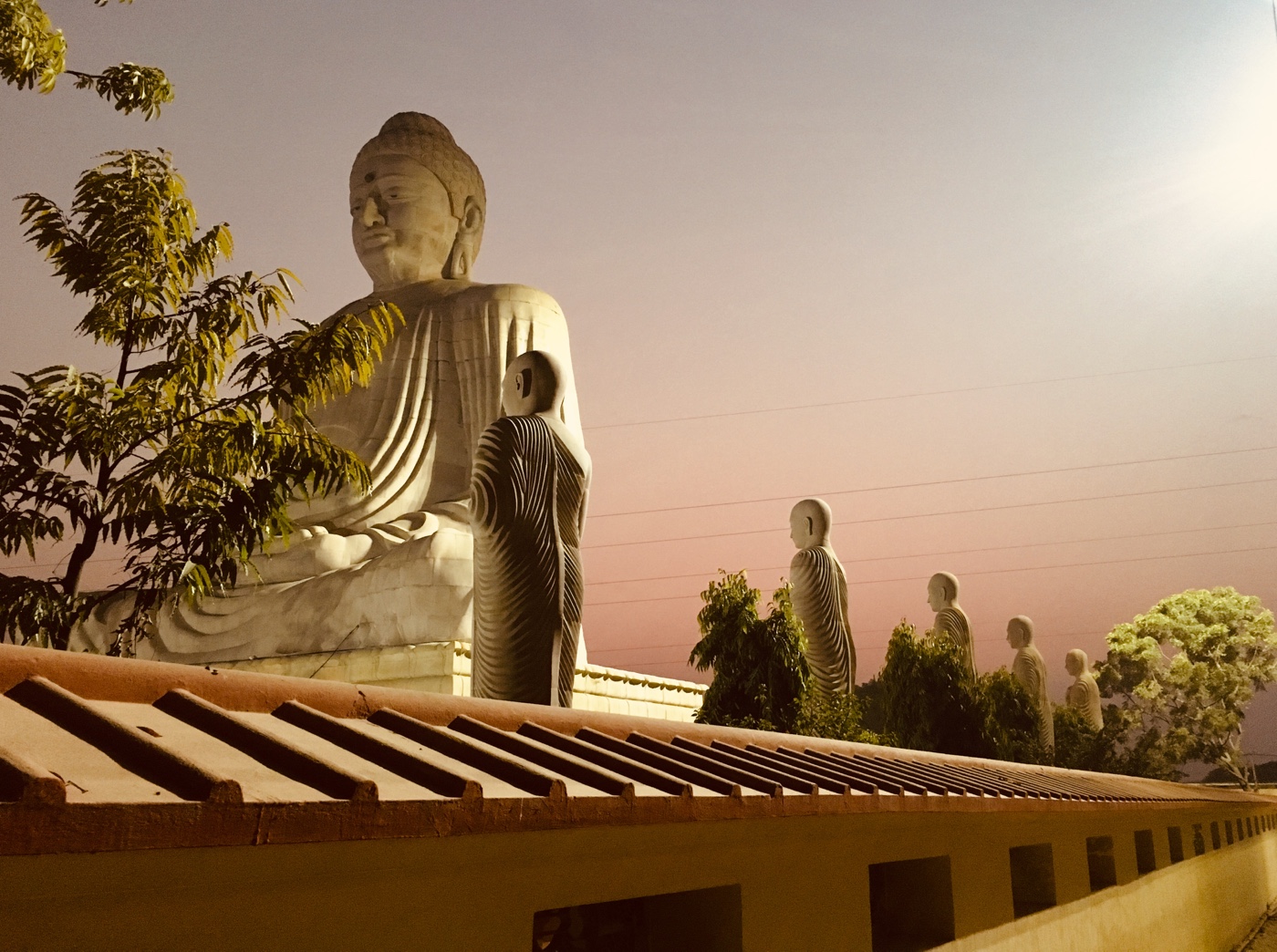 Hello there! It’s Troy, guest writing a post about our recent experiences in Bodhgaya, India. This is a place I had been excited to visit for some time because of its ties to Buddhism. This is where the Buddha became enlightened after meditating under the bodhi tree about 2500 years ago. Buddhists from many different countries and cultures travel here every year to see the famous tree and the temple grounds that surround it.

We took a train late in the evening from Varanasi to Gaya, which is just North of the village of Bodhgaya. It was our first train experience in India and for the most part it went smoothly. There were several people that helped us find our car and get us situated in our seats. We had “sleeper class” tickets which meant each seat was actually a simple bunk where you could lay down. There were three of these bunks stacked vertically in each area with barely enough room to sit upright. When we first got on the train Michelle and I crammed our packs and ourselves in the bottom bunk and sat there all scrunched up until a friendly police officer showed us how to fold up the middle bunk to give us more headroom. We sat this way for a few stops until the train started filling up. We eventually had to put the middle bunk back down and decided to try to get some sleep. Michelle had a buddy sitting on her bunk with her, but if nothing else, he helped keep her feet warm! About five hours later we arrived in Gaya at around 1 o’clock in the morning. We piled out of the train and made our way to the front of the station to find a ride to our hotel. After a bit of haggling and price gouging on the part of the driver we arranged for an auto rickshaw or “tuk tuk” ride for what turned out to be a few hundred yards to our hotel. A quick exchange at the front desk and a short elevator ride with musical accompaniment by Kenny G and we made it to the room.

The accommodations were far from cozy and didn’t seem to match up with the reviews we had read about the place. The next morning we were both feeling cold, filthy from the train ride, and a bit claustrophobic. Since our next hotel was supposed to be nicer we decided to head to Bodhgaya to see if we could get into our room early and get cleaned up. We found a tuk tuk driver willing to take us into town for a reasonable price and headed out. The driver dropped us off near the main temple grounds and we hiked the rest of the way to our hotel. Luckily our room was available, clean, and spacious. It was nice to finally get cleaned up and find a place that was much quieter than every other place we had stayed in India. After a nice hot shower and a change of clothes we headed back into town to see the main temple. 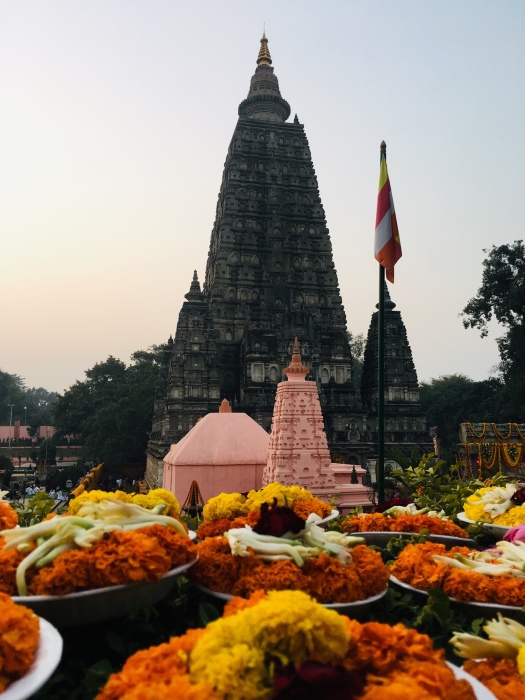 The Mahabodhi Temple is a tall skinny pyramid like structure in the middle of the grounds next to the well cared for bodhi tree. The temple and surrounding area looked stunning and vibrant in the late afternoon sun. The grounds were humming with activity as pilgrams chanted prayers, made offerings, and walked in clockwise circles around the temple and sacred tree. We snapped a few pictures and joined in the circle walking for awhile, then decided to check out the main temple. Inside the temple we found a large golden statue of the Buddha with people filing through to pay their respects or just snap a quick selfie. Somehow we ended up in a line where one of the attendants was handing out food offerings to share. Michelle was handed a couple of apples and I got a pear and whole pineapple! We shuffled out of the temple and found a relatively quiet spot to munch on our fruit and figure out what to do next. A group of Tibetans started handing out some snacks and tea to everyone. I got in line to take advantage of the kind gesture while Michelle guarded our pineapple. Suddenly she joined me in line and said a nice old monk offered to babysit our fruit. We collected our snack and sat back down to take in the moment. We walked around the grounds a bit longer then found a nice place to sit near the bodhi tree where a large group of Tibetans were chanting. I looked over and sitting next to me was my friend Thupten from Minneapolis! We chatted with him for a little while then decided to head back to the hotel from some dinner and a good night’s sleep. 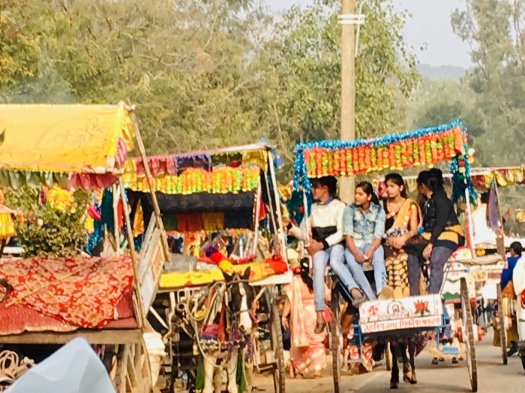 We slept in and had a late breakfast. Then we headed out to meet up with my other friend Nancy, Thupten’s wife, and Thupten for some visiting and tea. Next was a visit to Vultures Peak in Rajgir, which is a two hour drive north of Bodhgaya. This was where the Buddha gave another important teaching, which is summarized in the heart sutra. When we arrived we found that there are two ways to get to the top of the mountain. One is by a sketchy looking ancient chair lift and the other was by foot, up about 1500 concrete stairs. We opted for the stair path and headed up. Since this was holiday season for the Indians there were stands set up all the way to the top selling everything from food to cheap plastic toys to religious knick knacks. The mass of visitors ambled along the dusty trail sweeping us up the mountain while many of the locals pestered us to take selfies with them. At the summit stands a large white stupa along with a few small displays noting the significance of the place and the names of various patrons who contribute to the site’s upkeep. The mountain top was also home to a group of large monkeys with long tails, blondish fur, and black hands and faces. They were much different from other monkeys we had seen in other parts of India. The internet seems to call them “gray langurs”. Most of the langurs seemed content to sit around watching the humans milling about doing whatever humans do and waiting for the odd bit of dropped food scrap. 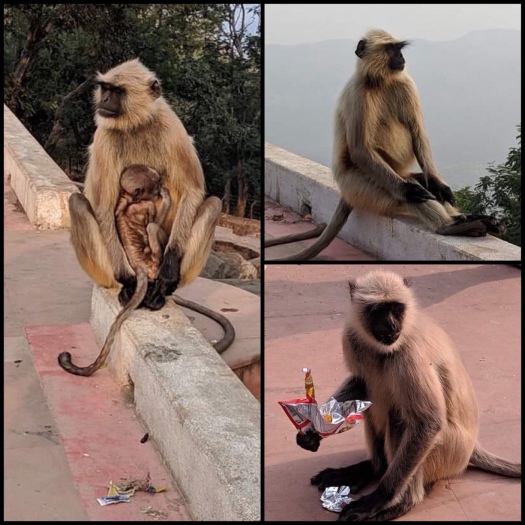 The humans busied themselves with snapping photos of each other, keeping up with their social media, and other sightseeing activities. Michelle and I made our way around the grounds and the stupa then sat down to experience the spiritual weight of the spot. It was strange to be at a place with such religious value to one group of people yet filled with visitors who seemed to pay it as much respect as the world’s largest ball of twine. After our brief rest we made our way back down the mountain to catch our ride back to Bodhgaya. 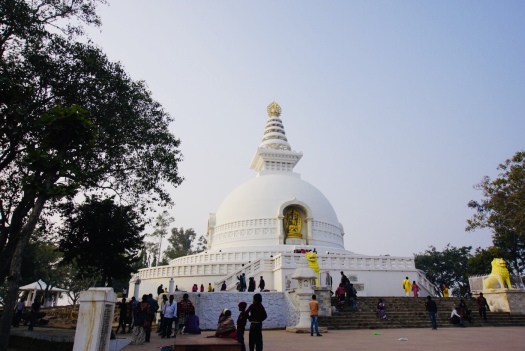 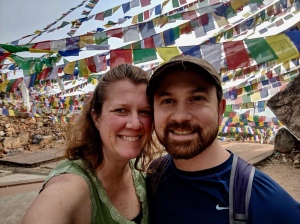 Our last day in Bodhgaya started with a trip back to the temple grounds for some quiet reflection and general people watching. It ended up being much more difficult than we expected. It took us a few tries of passing through the two security stations before we made it in without being sent away for one rule violation or another. We headed toward the large group of trees near the back of the temple where some AstroTurf had been set out for people to sit on during the recent teachings. Several young Tibetan Buddhist monks were busy packing up the displays that had been erected for the previous day’s activities. We sat under the tree taking in the atmosphere and read for a while before heading off to find something to eat. The rest of the day was spent walking around the various markets near the temple, picking up a few momentoes, and briefly visiting with my friend Nancy. We then headed back to the hotel to pack up and get some sleep before our very long travel day to Kathmandu. 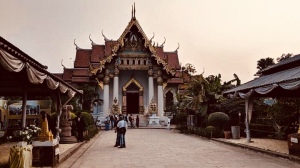 One Reply to “Varanasi to Bodhgaya”